The Laws of Cricket is a code which specifies the rules of the game Worldwide and from the village green to International Test Matches.

The earliest known code dates back to 1744 and was published by ‘The London Club’ following a meeting in a Pall Mall Gentleman’s Club. The code established that teams shall consist of 11 players, that disputes shall be settled between 2 umpires, the concept of the ‘Over’ was introduced and the size and weight of ball established. In 1771, the width of a cricket bat was restricted to 4¼ inches, whilst the 1774 Code saw the introduction of the LBW law.

Since 1788, the Laws have been maintained by the custodian of the Laws the Maryleborne Cricket Club (MCC). A new code was established at that time introducing the LBW.

The 2017 Code was a significant amendment with over 200 changes made to the Laws of Cricket. Notably the Laws relating to Unfair Play were heavily amended and Law 42 was totally re-written and now lays down the laws in relation to Player Conduct.

The MCC remain the custodians of the Laws of Cricket and there are many ways to read and study the Laws and improve your knowledge.

The Official Book of Cricket Laws or the Blue Book as it is known, contains the full wording of all the Laws. Small enough to fit into your pocket, this is the definitive document that no Umpire or Scorer can be without. 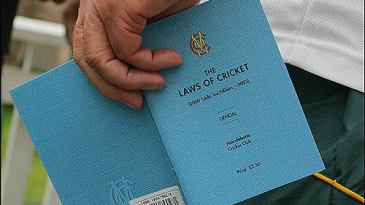 This is a really useful link. Each of the 42 laws is individually identified and you can navigate directly to the Law you wish to know more about. You can also search elements of the laws and there is also a useful e-learning option for each Law to help you test your knowledge.

PDF Download in English – In effect from 1st April 2019

The written laws in full

Animations to the most common  Law FAQ’s

The Laws quiz with 3 levels of complexity

All 42 Laws are presented in an easy to understand manner with 15 of them animated for a greater degree of understanding, narrated by Stephen Fry. Videos of Umpire Signals complete the picture to halp your understanding of what is taking place on the field.